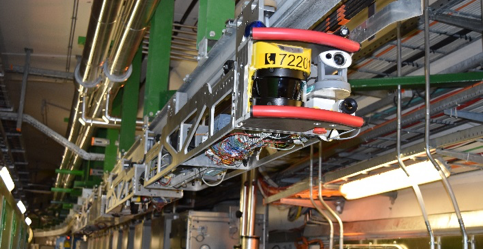 The Train Inspection Monorail (TIM) is a mechatronic product initially designed for CERN’s specific needs, with the goal to provide unmanned operations in the Large Hadron Collider (LHC) tunnel when there is no active beam, during beam stops and machine shut-downs. The main functionalities that TIM provides, are surveying, monitoring, safety and ad-hoc interventions when necessary.

The train operates on a monorail that is installed on the ceiling all around a tunnel. Communication is done via 4G but can also be done via WiFi. It consists of five wagons: control, battery, motor, payload and reconnaissance wagon, each one designed for a different purpose. All wagons are featured with different types of cameras, sensors, PCs, controllers and mechatronic systems. The system is extensible and adaptable by varying the sensors, cameras and equipment on board. Moreover, by adding items like robotic arms the versatility of TIM can be further extended. TIM is an autonomous system that can be operated from the surface through an advanced human machine interface (HMI), which allows the operator to manage its movement and send it to perform various missions autonomously. In addition, TIM gives a reliable visual feedback using the cameras, installed along the train, as well as the status feedback of all the important data acquired, in real-time.