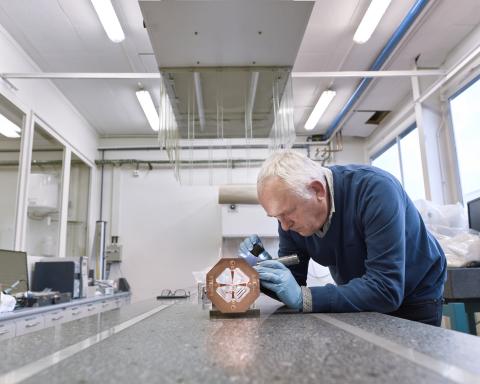 Particle accelerators find several uses outside fundamental physics research. Following the first “miniature” accelerator developed for a compact injector for proton therapy, CERN has been building a new transportable high-frequency accelerator for use in the examination of art masterpieces.

The accelerator relies on the proton-induced X-ray emission (PIXE) technique, and CERN has been working on building a radio-frequency quadrupole (RFQ) for this purpose since mid-2017. Innovative beam dynamics have been developed to make the PIXE-RFQ more compact and consume less power. The result is a short proton accelerator measuring one metre in length that can provide a beam of 2 MeV with a power consumption of less than 6 kVA.

CERN and INFN are collaborating on a common project called MACHINA, which stands for Movable Accelerator for Cultural Heritage In-situ Non-destructive Analysis. INFN, and in particular the Cultural Heritage Network (CHNet), has more than 35 years of experience in accelerator analysis of cultural-heritage artworks. Through a collaboration with the Opificio delle Pietre Dure (OPD) in Florence, masterpieces by Leonardo da Vinci, Antonello da Messina, Vasari, Mantegna and others have been studied. Collaborating with INFN-CHNet thus allows compact proton accelerator technology developed at CERN to be optimised and used in cultural-heritage projects.

Last December, the PIXE-RFQ reached an important milestone: after about one and a half years of high-precision machining and metrology at the CERN workshop, the four vanes of the first of two modules were assembled by vacuum brazing. The modulation at the tip of the vanes allows the particles to be accelerated and must be machined with a precision of 10 µm. The vanes, which are 50 cm long and 7 cm high, must then be assembled with a precision of 30 µm. Vacuum brazing is the best technique for this assembly and, thanks to a procedure initially developed for the Linac4 RFQ, the process is now highly efficient. During a controlled heating cycle under vacuum, wires of a silver–copper alloy melt and the liquid flows between the pieces. Springs are used for alignment during the heating. After cooling and solidification, this forms a perfect joint between the copper pieces.

The construction of the new accelerator isn’t finished yet, but the MACHINA/PIXE-RFQ project is well on its way. First beam tests are expected in late 2019 and first analysis of a real art object at the OPD is scheduled to be conducted in 2020. The construction of the PIXE-RFQ is fully supported by the CERN Knowledge Transfer Fund, with contributions from the EN/MME and BE/RF groups.

More pictures of MACHINA are available on CDS.