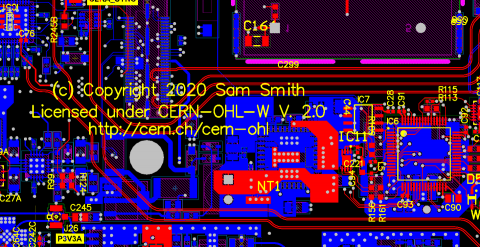 Nine years after publishing the first version of the CERN Open Hardware Licence (CERN-OHL) – which governs the use, copying, modification and distribution of hardware designs and the manufacture and distribution of any resulting products – CERN has now released version 2.0 of the licence. The latest version uses simpler terminology, introduces three variants of the licence, and broadens its range to include designs that go from artistic to mechanical to electronic, as well as adapting the licence to cases such as application-specific integrated circuits (ASICs) and field-programmable gate arrays (FPGAs). It can even be used to license software.

“The CERN-OHL is to hardware what the free and open-source licences are to software,” explains Myriam Ayass, legal adviser for the CERN Knowledge Transfer group and one of the authors of the CERN-OHL. “It defines the conditions under which a licensee will be able to use or modify the licensed material. It shares the same principles as free software or open-source software: anyone should be able to see the source – the design documentation in the case of hardware – study it, modify it and share it.” ‘Source’ includes schematic diagrams, designs, circuit or circuit-board layouts, mechanical drawings, flow charts and descriptive texts, as well as other explanatory material.

“Open hardware gives designers and users the freedom to share hardware designs, modify them, manufacture products based on the design files and commercialise those products. This freedom enables collaboration among engineers, scientists, researchers, hobbyists and companies without the risk of vendor lock-in or other issues present in proprietary development,” explains Javier Serrano, an engineer in the Beams Department at CERN and the founder of the Open Hardware Repository (OHR).

Version 2.0 of the CERN-OHL introduces three variants of the licence – strongly reciprocal, weakly reciprocal and permissive – which aim to address specific constraints caused by different collaboration models currently used in open-hardware projects. The first two variants mean that if any product is made using an open hardware design, the design of that product, including any improvements or modifications, should be made available under the same licence as that of the original product. Permissive licences do not impose this condition.

Andrew Katz, a lawyer and “open” specialist from Moorcrofts LLP, who has also been involved in the drafting process, said he believes the new drafts adopt best practices from the world of open-source software, while adapting to the specific and uniquely complex challenges presented by open hardware. “We’re particularly excited by the enthusiastic response we’ve had to the drafts from members of communities in all sectors of open hardware, and we’ve been very grateful for their valuable comments and input.”

CERN will soon submit the CERN-OHL for endorsement by the Open Source Initiative (OSI) and the Free Software Foundation (FSF).