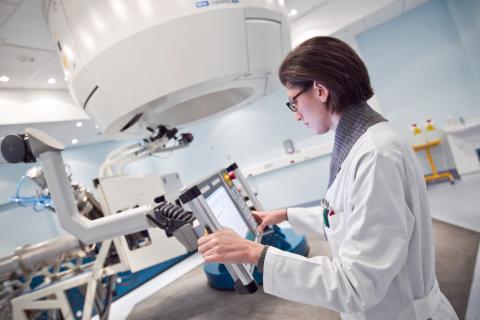 The CNAO (Centro Nazionale di Adroterapia Oncologica) hadrontherapy centre in Pavia, Italy, hit the headlines in January, when for the first time in the world, a patient with ventricular arrhythmia was treated with proton beams. Ventricular arrhythmia is an abnormality of the heart’s rhythm and can prevent oxygen-rich blood from circulating around the body. In this particular case, the patient was suffering from frequent cardiac arrests.

Hadrontherapy centres such as CNAO routinely use proton beams to treat cancer, exploiting the beams’ property of depositing energy very precisely in the tumour region, while not damaging surrounding healthy tissue. For this cardiac patient, who had not responded to any drugs or traditional interventions, doctors decided to bombard the part of the heart responsible for causing the irregular heartbeats with a proton beam. The procedure was a success and the 73-year-old patient is recovering well.

CERN and CNAO have a long-standing collaboration, which dates back to the design phase of the treatment centre. In the early 1990s, under the impulsion of Ugo Amaldi, CERN hosted and contributed to the Proton-Ion Medical Machine Study (PIMMS), which aimed to combine efforts and expertise in order to optimise a design for a cancer therapy synchrotron. The PIMMS concept was made publicly available and, after further enhancement by Amaldi’s TERA foundation, evolved into the final CNAO accelerator, with seminal contributions from INFN; the MedAustron centre in Wiener Neustadt, Austria, was then based on the CNAO design. CERN continues to collaborate with CNAO and MedAustron by sharing its expertise in accelerator and magnet technologies.

CNAO is one of only six centres in the world able to perform hadrontherapy with both proton and carbon ions and has treated more than 2700 cancer patients since opening in 2011. Perhaps this is just the start of using hadrontherapy outside of the field of oncology. It is another perfect example of how tools developed by particle physicists, to pursue their scientific goals, can have beneficial (sometimes even unexpected) applications well outside the walls of CERN and other basic research laboratories.

As CNAO keeps expanding its therapeutic reach, for example through the addition of a new dedicated proton therapy system, and CERN starts its NIMMS (Next Ion Medical Machine Study) programme to develop technologies for ion therapy, one can expect numerous synergies and collaborations in the years to come.