CERN and Turkey Network on Innovation in Istanbul 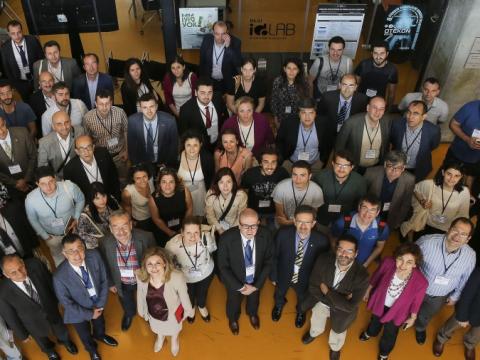 CERN and Turkey organised a joint Knowledge Transfer Summit this May, aimed at strengthening the links between different leading actors of innovation.  The summit brought together leaders from academia, technology and industry and was held at Istanbul Bilgi University. It was attended by representatives of the CERN Knowledge Transfer group, the Turkish Technology Transfer Offices (TTO) and Turkish industrials.

The summit was held roughly one year after Turkey became an Associate Member State at CERN. The first session addressed the range of Turkish activities at CERN, with a presentation given by Mr. Hakan Kızıltoprak, the Turkish Industry Liaison Officer at CERN.  Mr. Kızıltoprak summarised Turkey’s relations with CERN giving details and remarks on the associate membership of Turkey at CERN, and the function and organization of the Turkish Industrial Liaison Office at CERN.

Other contributions included Professor Serkant Ali Çetin, Director of the High Energy Physics Research Center of Istanbul Bilgi University, who summarised the history of Turkish involvement at CERN over the last 40 years. There are currently eleven CERN programmes in which Turkish institutes collaborate, including the ATLAS and CMS experiments which detected the Higgs boson in 2012.

During the summit, Dr. Giovanni Anelli, head of the Knowledge Transfer group at CERN, presented the broad range of activities that aim to accelerate the innovation process at CERN and maximise the positive impact of CERN’s activities on society. Anelli gave a detailed overview of opportunities for Turkish industry to collaborate with CERN on knowledge and technology transfer. Interested parties had the chance to book direct one-on-one sessions with him during the rest of the summit.

Overall, the event provided a unique interaction opportunity between CERN-KT and Turkish TTO’s and companies, enabling Turkey to gain more momentum right after its first year as CERN associate member.

The “CERN-Turkey Knowledge Transfer Summit” was jointly organised by High Energy Physics Research Center of Bilgi University, the Union of Chambers and Commodity Exchanges of Turkey (TOBB) and CERN, with Istanbul Bilgi University and TOBB University of Economics and Technology as supporting institutions.

This article was written by Hakan Kiziltoprak and Serkant Cetin. Another version of this article is published in the September edition of the CERN Courier.