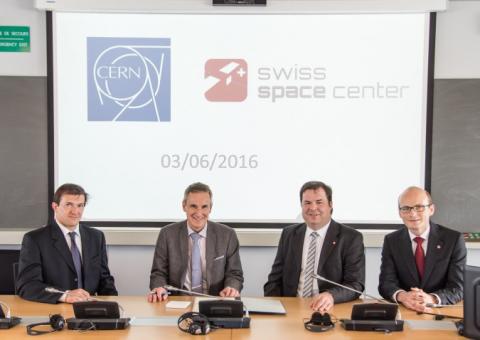 CERN signed an agreement with the Swiss Space Center (SSC) on 3rd June 2016, during the CERN/SSC Technology Transfer event, entitled “From High Energy Physics to Aerospace – Collaboration Opportunities”. The Swiss Space Center, based on the campus of the Swiss Federal Institute for Technology in Lausanne (EPFL) with a hub at ETH Zürich, provides a service supporting academic institutions, Research and Technology Organisations (RTOs) and industry to access space missions and related applications. The agreement ensures that CERN can benefit from the SSC’s expertise on space activities, and falls within the context of other bilateral agreements that CERN is establishing with national space agencies worldwide.

This event, organized by the CERN Knowledge Transfer Group together with the SSC, aimed at presenting a selection of relevant technologies and facilities from CERN to the Swiss aerospace industry and research groups. The agreement will strengthen links between CERN and the SSC and aims to facilitate the establishment of further bilateral or multilateral projects with SSC partners interested in R&D or potential commercial exploitation of CERN technologies. Switzerland has a strong tradition of R&D in the aerospace sector, as well as substantial links between research institutes and industry related to space, making it a strategic partner for CERN.

Martin Steinacher, the Director for Finances and Human Resources at CERN, emphasized that the agreement coincides with CERN’s dedication to increase the transfer of CERN’s technologies and knowledge to the aerospace sector. The Director of the Swiss Space Center, Prof. Volker Gass, expressed his appreciation of CERN’s technical capability to contribute significantly to aerospace applications, and valued the newly established links between the two entities.

During the one-day meeting attended by representatives of the 32 members of the SSC, several technologies of potential mutual interest were showcased, including a  pilot implementation project related to micro-technology for thermal management of detectors and space systems. Other possible collaborations include the use of CERN’s irradiation facilities for space qualification activities. Participants were invited to visit guided tours of the CERN Computing Center, CHARM irradiation facility and the Payload Operations Control Centre of the Alpha Magnetic Spectrometer (AMS-02).